Got a wonderful email from Janet Watkins (Hereward Pickmere's daughter) with the info and pics below. Many thanks Janet, gold.

Standard mullet boat rig – has proved very satisfactory on several ocean voyages. Jib headed sails afford a very comfortable rig in bad weather.
Planking is considered by some authorities to be rather light (One inch finished) but has given no cause for worry in the last ten years. Bottom timbering very strong and heavy. Double ribbed along turn of bilge for extra strength. This was done by me in 1931 before leaving for Fiji. No structural additions or any re-inforcements added since 1931 as this was unnecessary.

Speed under sail: Not fast, but capable of maintaining good average speed at sea in bad weather as in 1935 on trip from Fiji to Auckland: 3 days moderate winds, 4 days S.E. to S gale, 3 days flat calm, 2 days light N.E abd finally 2 days severe N.E gales – logged 1410 sea miles at average speed 4 1⁄2 knots. Sailing time 13 days 5 hours.
Being high wooded, beamy and therefore very buoyant, is dry and comfortable in heavy seas. Bow rather too bluff above water but run in is very fine. Does not drag, therefore little danger from following seas. The safest vessel I have ever handled in a following sea due to the fine run and good buoyant stern.
Hull has been well protected. Planking never attacked by teredo at any time. Some old teredo holes found in rudder post April 1941, but no live worm anywhere in the hull except false keels
which are easily replaced. Rudder post repaired and all necessary caulking and bottom repairs done by P.Vos Ltd, April 1941. Hull has never been copper sheathed,
Keel: Iron, supported by 8 one-inch galvanized bolts through iron, true keel, keelson and nutted above upper keelson which is hardwood 10” x 5 “

TOUCHING UP THE PAINT WORK ON THE TRANSOM. 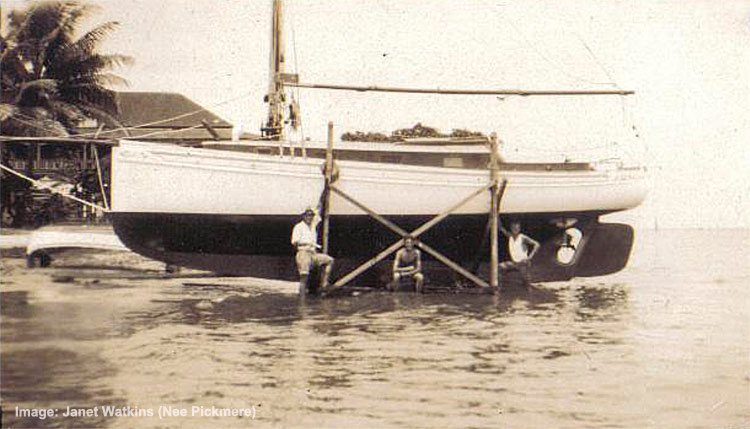 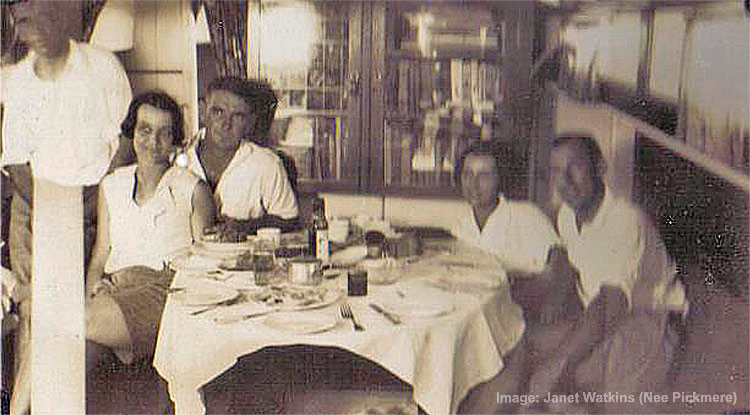 The Main Saloon looking forward:
Note the glass bookcase, the large oval dining table, the head room when seated on the bunk.
Access to the galley & forward cabin was on the port side. 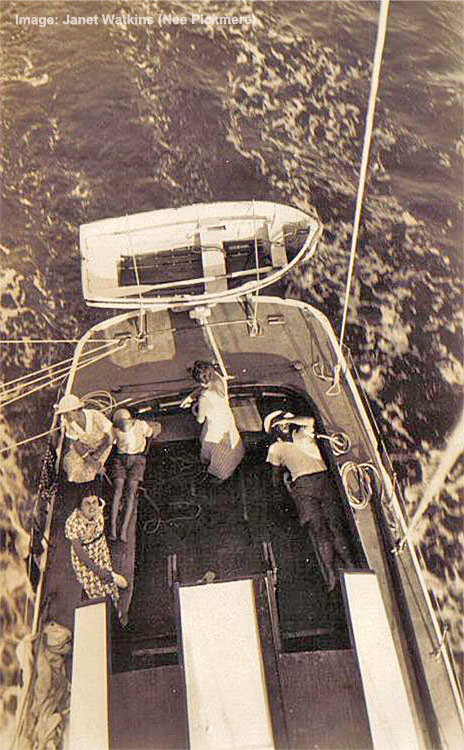 Looking Aft and from the Crosstrees showing the spacious cockpit and double companionways. The engine was between the two stairways to the saloon
Note: the steering wheel amidships and the dinghy carried astern on supports. 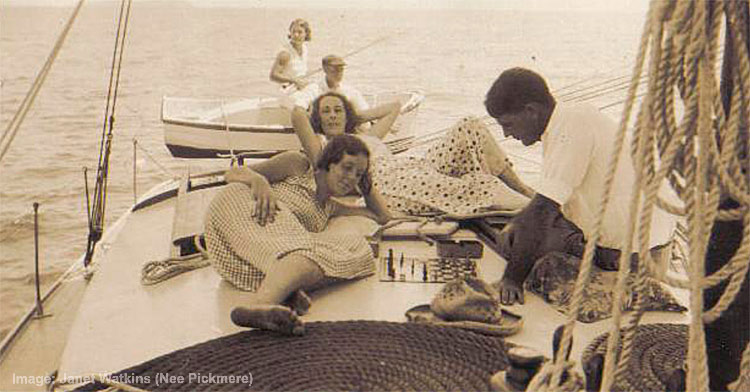 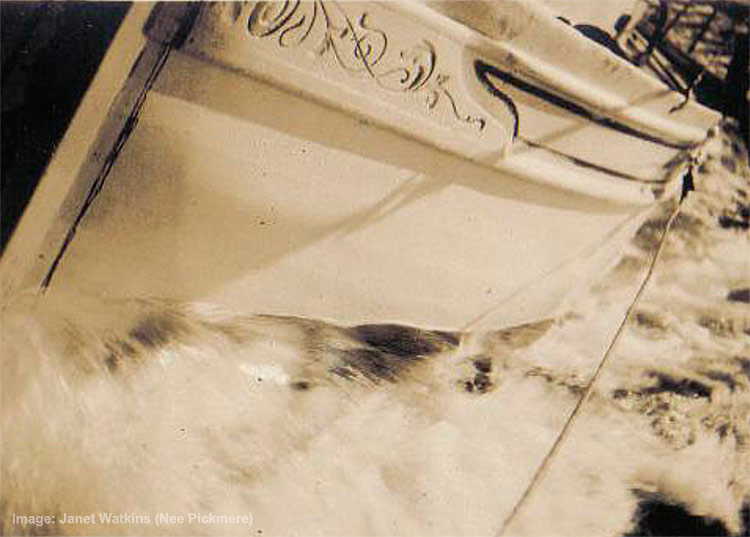 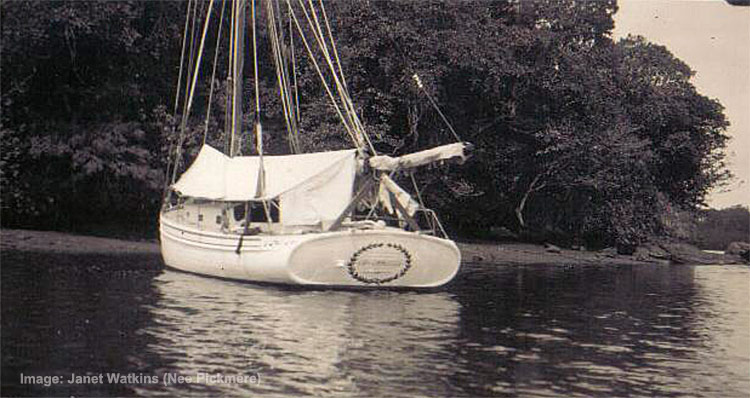 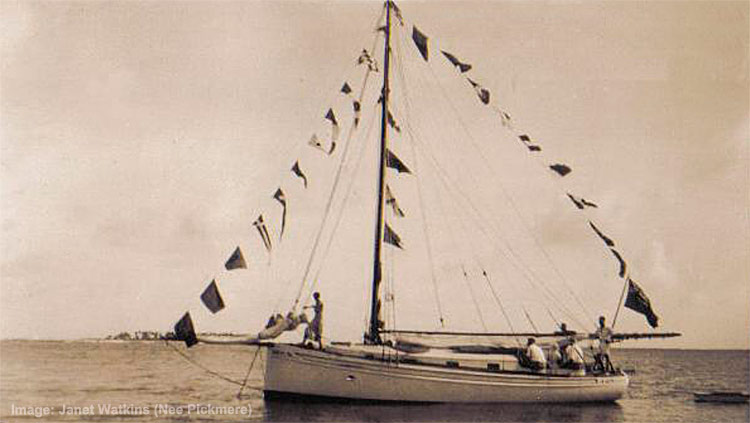 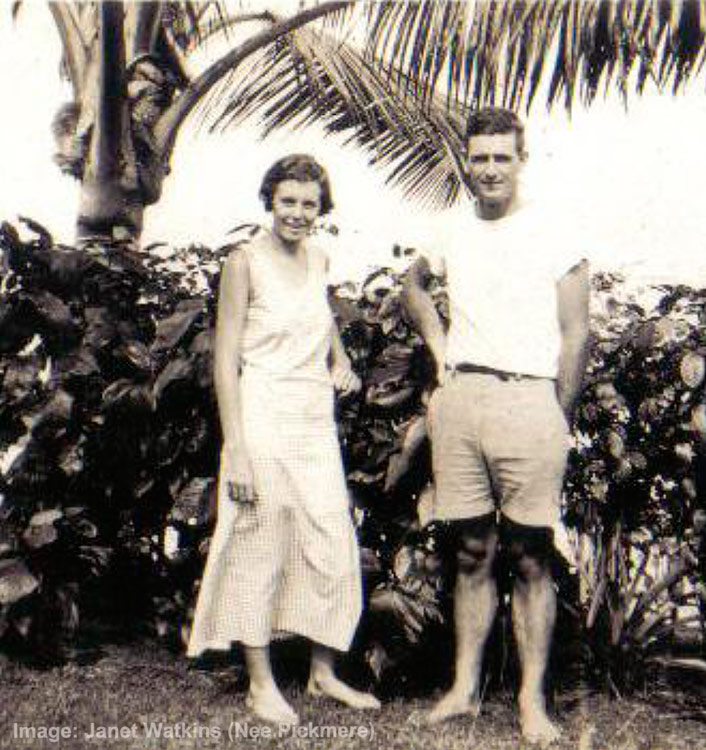 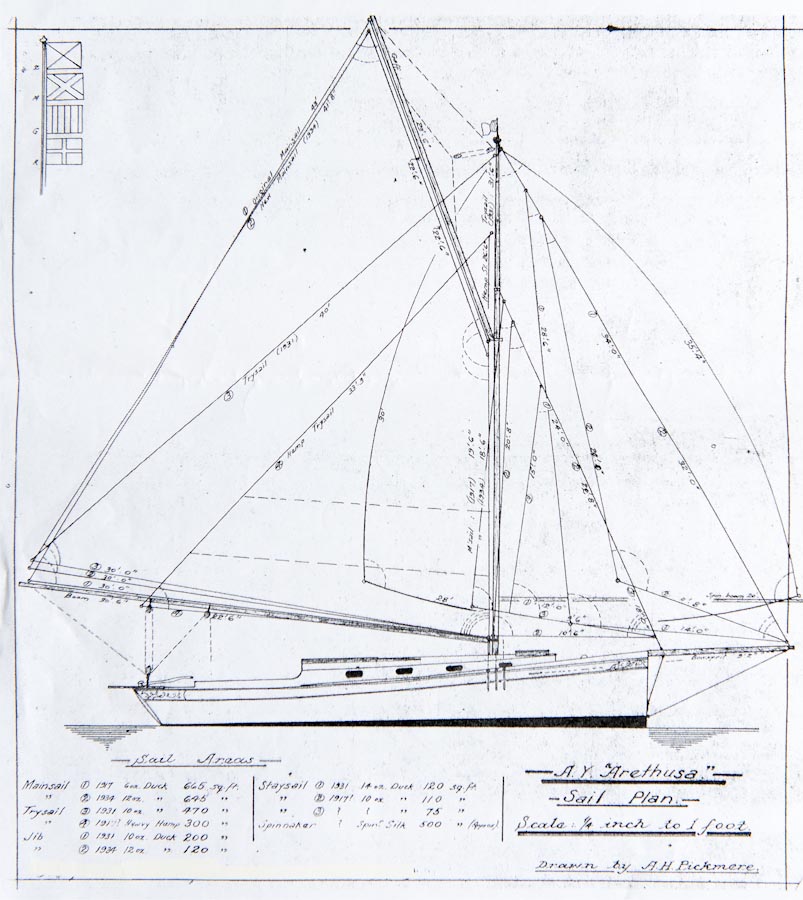 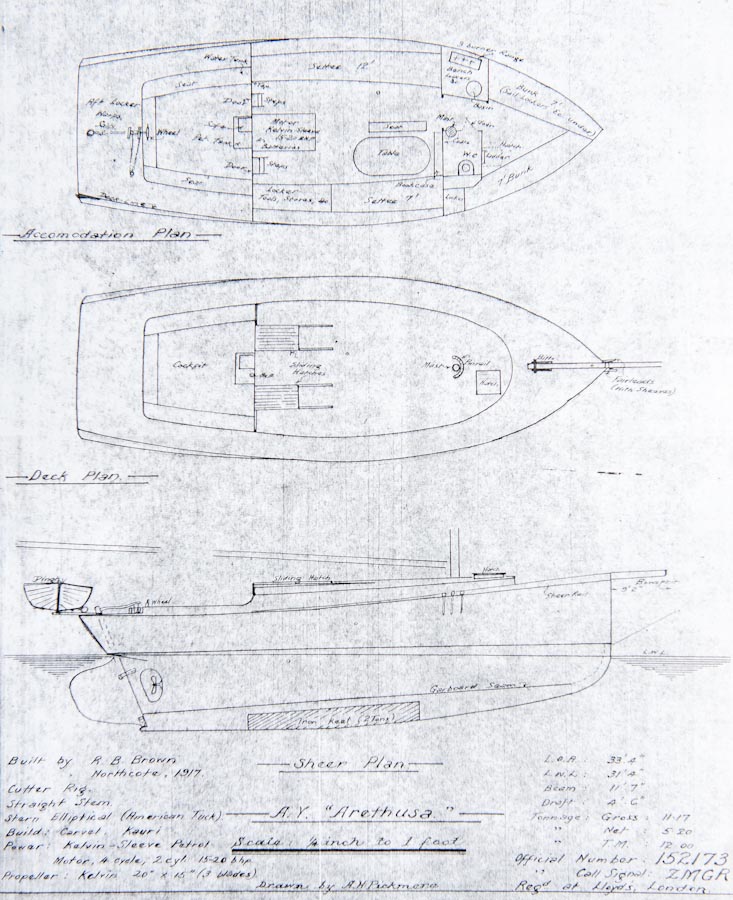 Originally had carved on the tuck:
“Built to commemorate “H.M.S. Arethusa” at Heliogoland 1916”
(I understand the brother of the builder was killed in action on H.M.S. Arethusa at Heliogoland. “Arethusa” was a flotilla – see account in Taffrail’s book “Endless Story.”)

Various owners until owned by Mr. W.D. Winstanley of New Plymouth. Seen still rigged as a yacht on the hard at New Plymouth in August 1955.

Arethusa was purchased from Lloyds by Mr. I.B. McNabb of Collingwood for £250 after grounding on Farewell Spit. McNabb salvaged the new diesel engine and sold it for £500! The hull was little damaged and was put on a sledge and towed by tractors across the Spit to Golden Bay then floated to Collingwood where she was refitted and used as a home for McNabb in conjunction with his fishing activities.

Many of these press reports are not very accurate!!

Remarks on Hull design & Construction by A.H.P.:
Buoyancy gained by high free board and broad beam most useful at sea. Overhang of the A Class keeler are useless and detrimental in open sea.

Consider Arethusa’s tuck and underwater body aft to be the most seaworthy type yet designed. Bow not too high, but may be better in head sea if lengthened a few feet, and rather finer above water. Bluff bow is a disadvantage in short head sea, although not wet, but is distinct advantage off wind owing to its buoyancy. Fine run is far more important than fine entry.

Arethusa is a dead wood hull, keel being 20 inches deep amidships (below Garboards). I consider this unpopular construction to be much superior to the moulded down bottom as it is much stronger, affords good protection to hull proper when grounding, does not leak, permits greater depth of outside ballast without excessive draft.
Moulded bottom means deep inaccessible well inside, where leaks are most likely to occur and most difficult to find or stop.

Arethusa’s sailing on the wind is impaired by having to drag a 20” x 15” propeller in large aperture. The aperture is more detrimental than propeller drag as it interferes with the slip-stream past the rudder.

Draught: Arethusa’s draught is 4’ 6”.This was found to be quite enough. Yacht on long commission in the tropics (or anywhere else for that matter)  where patent slips are not available except in Suva – at a price – it is convenient to beach occasionally for inspection or painting. As rise and fall of tide is rarely more that 4’ 6” (In places being only 3 feet or less, in others about 6 feet) it is obvious that shallow draft (i.e. Less than 6 ft and preferably less than 5 ft) is desirable.

Painting: I slipped Arethusa in Suva once a year – usually end of March, for one coat of paint on topsides and two coats of copper. I usually beached her about September or October for another coat of copper, and that is all the protection she ever had against teredo. I never had the slightest trouble with teredo except in her hardwood false keel. After a year a new hardwood keel was riddled and was replaced with a kauri keel which appears to be worm proof.

Iron ballast: Two tons on keel. I prefer iron keel to lead as it is so much stronger and more rigid and does not get chewed off on the coral. My Keel ballast is cast iron 11 feet long, 15 inches deep and 8 inches wide and is set amidships immediately below the true keel, the spaces fore and aft being filled with solid kauri, rising well up to the forefoot  and slightly aft of the rudder post. The iron is protected by a mixture of red & white lead and zinc and then copper painted. I have no use for copper sheathing on a yacht.

Planking: Planking is light (only 1 inch) but timbers below floor very heavy and strong, being 12” x 3 “ kauri floors, spaced 22 “ apart (centres) with 6” x 4” pohutukawa frames full width between. False keelson 10” x 5” hardwood is laid over the tops of the frames and checked through the floors and the ballast bolts come through the iron keel, keel, keelson &c., and are nutted on top of the upper keelson, effectively clamping all the main structural members into a strong and rigid unit.
All floors securely screwed down, giving additional strength equivalent to a deck.

Inside Ballast: at present about half a ton and motor half a ton. Water ballast tanks 8 cwt. (Rarely used.)
Before leaving on the first ocean trip I dumped over a ton of inside ballast and found that this was exceeded in weight by water, fuel, stores and spare gear. Since then I have not bothered to replace it. Sails better deep laden - inside ballast not necessary.

Ocean cruising is very different from longshore racing and I am convinced that many make the mistake of providing excessive draft and too much ballast low down – equivalent to loading a full shipment of iron rails (for instance) in the bottom of a square rigger. As you know, big ships carry a large portion of the heavy cargo high up and not in the bottom as many would imagine.

(No storm jib is carried. On wind at sea in fresh breeze working jib only or in worse conditions, large staysail. Advantage to keep sails in board in bad weather.)

I am of the opinion that I could handle Arethusa very satisfactorily under the latter rig in almost any condition of severe weather and sea.

It will be observed that the Arethusa appears to be grossly over canvassed compared with other sea going vessels but I consider that it is a great advantage to be able to carry sufficientsail to take advantage of the fair weather, especially in the tropics. Most sea going yachts appear to become helpless in light weather owing to the lack of sail and a great many vessels, both large and small, have been wrecked in the tropics in broad daylight in flat calm weather through not being able to stem a set.

Arethusa’s long boom – 31 feet, 10 feet outboard, seems to worry many people but I have not yet experienced the difficulties that are said to arise at sea, by reason of this excessive overhang.
Changing sails at sea is simplified with a steel wire outhaul rove through the end of the boom.

It is most important to have sufficient lift in the foot of the mainsail and it is necessary to top the boom slightly when running in a high sea.

Arethusa’s spars and rigging are considered by some to be far too light. Suffice it that she has weathered a good many storms and, as yet has lost no spars. I have carried away backstays, bow sprit shrouds, preventers and topmast shrouds but only through cracking on in heavy seas.

Dinghy: As you may have noticed, I always carry the dinghy across the tuck on short bumpkins. I was informed about 8 years ago that this was a dangerous  practice, that it was sure to get smashed up by a sea. I still prefer to carry it there, especially in a heavy following sea and have never had any worry. It is usually loaded with dunnage and spare gear at sea.

This would not be satisfactory in a vessel with a narrow or over hanging stern lacking the reserve buoyancy.

Arethusa had originally seven berths, four in main saloon, three in fo’castle. One foreward is now a sail locker and one starboard aft is a bosun’s locker – now five berths. Would be a simple matter to fit four berths forward and four in the saloon.
Fitted with galley and patent WC between fo’castle and saloon.

Conclusion:
Given a choice of vessels I should choose a boat of Arethusa’s type, straight stem (a little finer perhaps – but not much), American tuck identical with Arethusa’s, cutter rig capable of large sail area, long bowsprit and boom, with provisions for jib headed sails besides the gaff rig, not more than 5 feet draft or less than 30 feet waterline, high freeboard and broad beam.

Open cockpit very safe for the watch on deck and has not yet shipped any dangerously heavy water. Permits of considerable protection from the weather for the crew and is very handy for breaking out and stowing sails and other gear without having to do it all on deck.

Light life-line even a foot above the sheer- rails, is useful.

I should much rather undertake an ocean voyage in Arethusa than any other of the small cruising yachts I have yet seen and prefer her rig to that of a ketch, yawl or the Bermuda.